Newark Showground is a showground in Newark, Nottinghamshire. It makes up 200 acres of the former RAF Winthorpe Airfield.

Stonedeaf Productions Ltd was formed from a group of veteran rockers who way back when would spend every year, throughout the the 80’s and into the 90’s, at the legendary Monsters of Rock festival at Donington Park. We got together on the Donington Monsters of Rock & Download Veterans Facebook page to share our stories and tales of festivals gone by.

Swapping tales of those fantastic days at the Monsters of Rock festival made us all realise just how much we miss that magical experience.  When you didn’t have to pay for an overpriced ticket, you could pitch your tent next to your car with your friends and hang out with a few beers and JD’s the night before and wake up ready to rock!

The Stonedead family has grown since the initial founding members and we now have an incredible gang of people taking care of everything to give you all the perfect festival experience, that we all miss and most definitely want

One Day. One Stage. One Monster Show…

Ticket Enquiries (Please include order number if relating to a purchase)  TICKETS@STONEDEADFESTIVAL.CO.UK 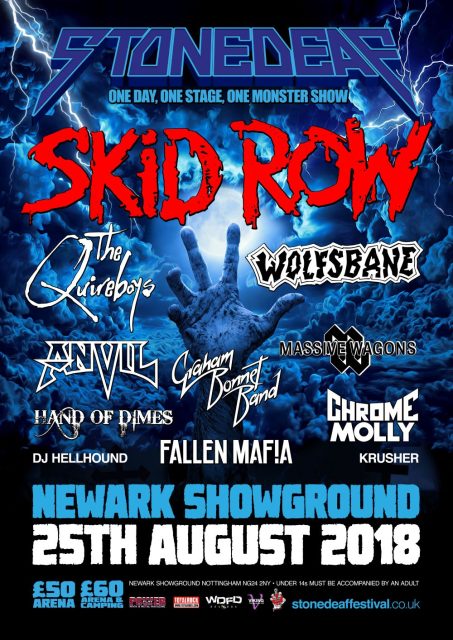 After many discussions over social media during the summer months of 2017, 12 rock fans joined forces to create a new rock festival of their own.

Influenced by their memories at the legendary Monsters of Rock festival and fuelled by their passion for live music – in Spring of 2018, Stonedeaf was born.

After these months of chats and ideas being thrown around, the 12 rock fans had become 5 and the Production team was created.

Job roles were allocated, a date was set, the planning was underway and within 5 months Stonedeaf Festival 2018 took place on August Bank Holiday at Newark showground, Nottinghamshire. There was onsite camping and some impressive companies wanting to be involved in the festival so this was always going to be a success.

With a line up consisting of Fallen Mafia, Hand of Dimes, Graham Bonet Band, Chrome Molly, Massive Wagons, Anvil, Wolfsbane, The Quireboys and the legendary Skid Row to headline all brought together and hosted by the one and only Steve “Krusher” Joule.

Stonedeaf Festival cemented itself right away as a favourite amongst fans within the British Rock community. 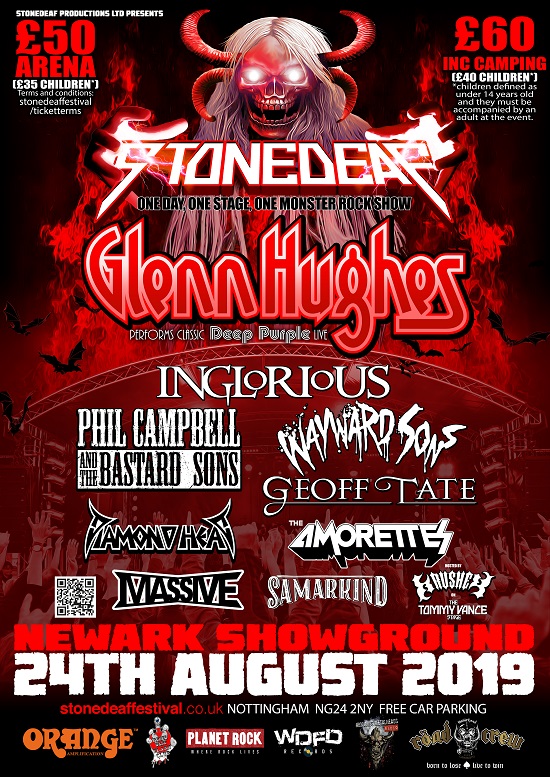 After the huge success of the 2018 event, it was clear there was a gap in the market for a monster rock festival like Stonedeaf. Tickets for the 2019 event immediately went on sale. For 2019 the crowd was bigger, more companies wanted to partner with the festival and another bumper year was instore.

The August Bank Holiday weather was set for a scorcher and again at Newark Showground hordes of volunteers signed up to work over the weekend. Camping tickets had sold out and when the Friday Night Party kicked off it was clear Stonedeaf festival was going to be THE place to be that Bank Holiday.

The Show started on Saturday in the glorious sunshine with Krusher introducing Samarkind who took to the stage to get proceedings underway. Massive followed and continued the day with an onstage party like no other. Bands that followed throughout the day were The Amorettes, Diamond Head, who had the honour of a spitfire fly over. Geoff Tate, Wayward Sons and Phil Campbell and the Bastard Sons. Then as the sun began to set special guests of the festival Inglorious took over and warmed the crowd up for the mighty Glen Hughes, who’s outstanding Deep Purple set brought the festival to a close.

The festival had a new name, new things in the pipeline, the bands had been booked and the party ready to go… And then a global pandemic hit. There were many occasions that it looked like Stonedead 2020 might be able to go ahead but it just wasn’t meant to be and the 2020 event rolled to 2021. 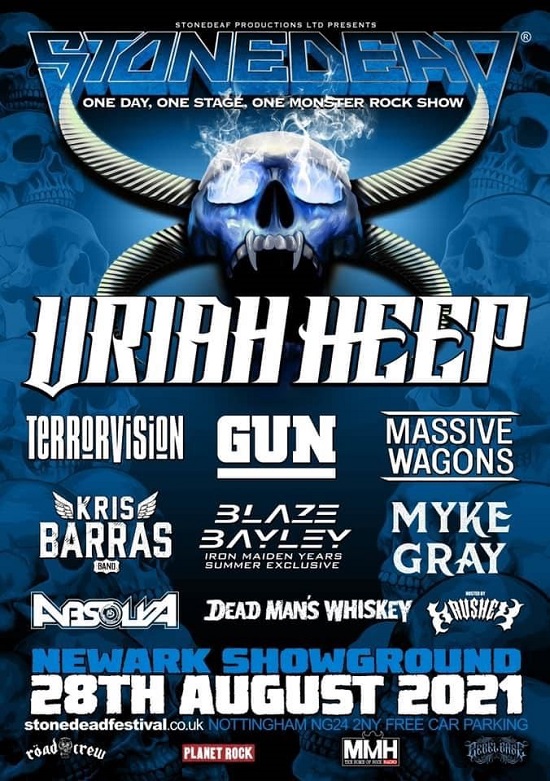 After “too much” time away Stonedead Festival was actually taking place and it was a sell out! Following a number of tough months, the field in Newark was open for business again.

With bands from the previous year still ready to go for 2021 it was time to get into the swing of things. However, all was not quite that simple. In the aftermath of a global pandemic there were band cancelations just weeks prior to the event due to travel restrictions, there were cancelations due to band members having covid themselves and there were never ending issues with equipment due to lack of availability following the many months of no festivals and gigs.

Following a stressful week’s set up and build Stonedead 2021 took place and the metal gods had their eyes on Newark delivering sunshine, smiling faces and music that was off the scale!

The Poll winners’ band Dead Man’s Whiskey took to the stage and got the day started in true Stonedead style with a thumping set that got the crowd well and truly ready for the day ahead.

Absolva followed and then the legend that is Myke Gray had the whole crowd jumping accompanied by the outstanding vocals of Dan Byrne. Blaze Bayley performed an Iron Maiden years exclusive set, before Kris Barras belted out a set including music from his new album “Death Valley Paradise” which got the crowd singing along as the afternoon got hotter! Massive Wagons returned to Stonedead 2021 as a very last-minute replacement for H.E.A.T. who were one of the bands that were casualties of Covid and unable to travel to Newark. It was unfortunate but the Wagons delivered a performance like no other with energy that only this band possess.

Gun and Terrorvision took us into the evening and had the crowd pumped and ready for the headline set from Uriah Heep, again a replacement band due to Covid restrictions and Black Star Riders not being able to join us, but Uriah Heep delivered, as they always do, and brought the day to an outstanding close.

And now to the present day, with Stonedead Festival 2022…